Tony Hall, a volunteer with the Bitton-based Railway, set up the Bristol Dementia Action Alliance after his wife, Barbara, was diagnosed with Dementia and it aims to help make Bristol a Dementia-friendly city

“At the Railway we have ensured everyone who comes into contact with customers have had training so that everyone is treated with the common courtesy and respect which we all expect. We have always been Dementia aware at the Railway but this is formalising it.”

The Purple Angel campaign was started in Torquay by Norman McNamara after he was really badly treated in a store and thought this is never going to happen again.They used the Purple Angel to define what they were doing. 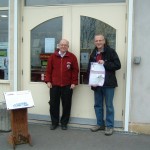 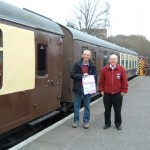 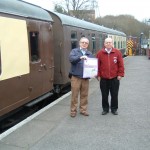 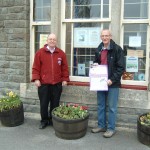 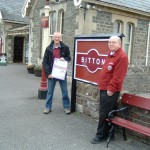 Common problems encountered by those with dementia include issues with money handling, confusion and staring, spatial awareness, speech, repetitiveness and the speed at check outs. Says Tony: “A little patience and understanding will help enormously and we have produced a guide for businesses which can be shared with staff. Just reading the guide will increase Dementia awareness in people and the use of the Purple Angel sticker will show customers and potential customers that an organisation is Dementia Aware. Avon Valley Railway now has the Purple Angel sticker on its trains, in the buffet, shop and ticket office.”

The heart of Avon Valley Railway is Bitton Station an original Midland Railway station, which like the locomotives, carriages and track, has been restored by a team of dedicated volunteers. Without the volunteers, the locomotives wouldn’t operate or be restored, tickets wouldn’t be sold and the site wouldn’t be maintained – but thanks to them and those that visit, the railway is being restored for the delight of current and future generations.

Support Us At The Co-Op